A client recently hired me to shoot more than 200 headshots; they wanted new photos of all their employees on a neutral, dark background. They didn't schedule a lot of time, so I had to be extremely quick, spending less than a minute with each subject.

Here is a typical example of how they turned out. Notice the large catch-lights in the eyes, the subtle contrast between the lit and shadow sides of the face for a more three-dimensional look.

I wanted to post about this shoot because of a pretty stellar posture trick I tried, one I picked up from a photographer friend with a lot more experience than me. It also has the added benefit of pulling out pretty genuine smiles (mostly because they feel so dumb doing it!) The trick is to have the subject sideways, instead of facing directly toward the camera, holding out their hands like they're carrying a baby, and then rotating at the hips back toward the camera.

This helps to pull the shoulders back and the chest up, and also helps eliminate the dreaded double-chin look, and overall just does wonders for the overall posture of the subject being photographed. Here is what a wide shot looks like illustrating the technique:

The subject can (and usually does) feel a little silly standing there with their arms out, especially in front of friends, or co-workers — you do definitely have to assure them that, no, you will not be able to see their hands in the photos — but the trick really does tease out a sincere smile most of the time, which is especially helpful when you don't have a lot of time to really coach the talent or work with their smile, this just gets it perfect right out of the gate.

The lighting set-up I used for these photos looked like this:

I used a very bright, very powerful LED light called the Forza 500, in a large, 150cm softbox, with a grid attached, to prevent too much light from spilling on the background.

This added a lot of nice wraparound-light to the subject's face. I also added a wand light boomed above the talent's head, to give a nice pop to the hair and separate it from the background, as well as adding a little more fill on the shadow side. Depending on the subject, that shadow side was still just a little too dark for my liking. Not having another light on hand, I simply clipped a white silk I had laying around in my kit (from an Aputure softbox) just to the right of the talent, which bounced back light from the softbox and filled in the shadows a little more. The black background was created just by using regular blackout curtains I found on amazon, clipped to two lightstands. All-in-all a very portable, easy setup, perfect for pushing through a huge number of subjects in a short amount of time. 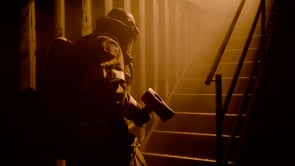